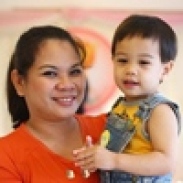 Guzz-Guzz Story has not received any gifts yet

...When he sees a bus,taxi,TV background or something that is colorful. He can tell me correctly its color, such as pink,blue,green,yellow,red,white,black. But he doesn't speak "Orange" in English. ><"

...Yesterday, he could say "Empty" following me when his snack was empty. -*-

...When he finishes something, he likes to clap his hands and says…