A parent's guide to video and computer games
by Kevin Simpson

Highlights:
- Why kids LOVE electronic games
- Choosing good games
- Handling violence in video games
- How much is too much?
- Getting up to speed

Electronic games dazzle us with cutting-edge graphics, excite us with seemingly boundless possibilities, and probably frighten us with the power they have over our kids. In our house, my 7-year-old son Zach has searched for dinosaurs, paddled the Amazon, explored the human body, learned Bible stories, and played 18 holes at Pebble Beach. And while he's no hard-core gamer — he'll still sometimes choose a box of 64 crayons over 64-bit graphics — I'm aware of the huge influence these games can have over him, for better or for worse.  As the market and influence of electronic games continues to grow, parents need to understand a few basics, such as why our kids are attracted to these addictive games, what they can learn from them, and how to avoid some inherent pitfalls.

Why kids LOVE electronic games
Lightning-fast processing speed, thundering audio, tantalizing graphics — certainly they're part of the allure, but they're really just window-dressing around the most elemental attraction: control. "Many kids, on a minute-to-minute basis, are told what to do, what to wear, what activities they can or can't do," says Warren Buckleitner, editor of Children's Software Revue. When they get their hands on a mouse or a game controller, they can do things that they may not be able to do in the real word, he notes — such as race cars, explore haunted houses, play sports with the pros — heady stuff for a 5-year-old.

Choosing good games
Of course, this empowerment cuts both ways, depending on whether the software channels it toward constructive or destructive behavior. Luckily, it's fairly easy to spot a good game — simply apply what you know about play in general to the video game market. "Good software is based on principles of play that have existed forever," Buckleitner says. Just like the kind of play your child enjoys in his own backyard, quality games offer intriguing searches, unexpected surprises, healthy sports competition — elements as old and entertaining as hide-and-go-seek.  Another way to ensure good choices? "Start with your child's interests," says Buckleitner. "You can also use that rule backward, too: What would I like my child to be exposed to more?" A former teacher, Buckleitner often watched students in the early grades struggle over their math and spelling abilities. But computer software can introduce formal academics in a playful, stress-free setting. Serious subjects tend to lose their intimidating edge when children encounter them in the comfortable context of entertainment.  But games don't have to be obviously educational to be teaching something. Even seemingly frivolous games can be packed with unexpected lessons. The hockey game I play with my son generates discussions about geography and international politics ("Dad, show me on the map where the Vancouver Canucks play," and "Why did the Russian team change its name from the Soviet Union?").

Handling violence in video games
This same hockey game also contains occasional fighting, and although nobody gets hurt, there's no graphic gore, and every scuffle ends with the play-by-play announcer admonishing the combatants as they skate off to the penalty box, the inevitable question arises: Do violent games create violent kids?  Over the last 20 years, studies have come down on all sides of the issue but produced no bottom-line clinical evidence that life imitates virtual reality. Even so, highly publicized incidents of school violence, some involving kids who dabbled in the games, have kept controversy roiling. "We're saying it's worth being concerned about," says Douglas Gentile, director of research for the National Institute on Media and the Family in Minneapolis. "But we're not out there waving a red flag."  What can concerned parents do? For starters, keep your antennae up. One survey by the institute revealed that 80 percent of high school kids were familiar with the popular shoot-'em-up title "Duke Nukem." Only 5 percent of parents had even heard of it. It's never too soon to tune in to your child's interests.  It also pays to read the reviews and pay attention to the ratings of kids' software. For quick guidance, the Entertainment Software Rating Board rates more than 6,500 titles from "early childhood" to "adults only." If the ESRB system has a weak link, it's enforcement by retailers. A good rule for parents: Know what your children buy, or be there when they buy it. Better yet, play it.

How much is too much?
Even the best computer games — especially the best — can be addictive. And too much time spent in front of a computer screen has negative consequences. "Heavy users of electronic media tend to have fewer activities, fewer hobbies, play less well with peers, and not do as well in school," says Gentile. "Light users tend to get the benefit of the media."  In 1998, Neilsen Media Research reported that the average American child or adolescent spends more than 21 hours a week watching TV. And that doesn't count time spent surfing the Web or playing video games. So when you're calculating reasonable parameters for your child, think overall "screen time." Gentile recommends between one and two hours of screen time per day, but notes that there are no magic numbers. More important is to encourage a variety of activities and emphasize balance.  Other ways to ensure that time spent at the computer emphasizes quality over quantity include:  • Be clear that computer games are a privilege, to be used only with parental permission.  • Make computer games a social, rather than solitary, activity. Experts emphasize the importance of keeping the hardware — whether it's TV game consoles or desktop systems — in a family area. Not only does this reduce the possibility that your child will isolate himself, but it gives you a chance to keep an eye on the screen. The American Academy of Pediatrics goes so far as to advise parents to keep their kids' room "electronic media-free."  • Place a piano bench — rather than a chair — in front of the family computer to invite multiple players, Buckleitner suggests.

Getting up to speed
One of the best and easiest ways to police your child's playing is to play the games with her. For young kids, simply seat them on your lap. That's what Buckleitner does with his kindergarten-age daughter when they compete in virtual auto racing against her big sister.  And if you're a technophobe, don't let intimidating technology or jargon stop you from playing with your child. While it's true that some genres of video games practically have their own language, kids under 8 won't be talking over your head.  That said, be prepared for some humiliation. When I reluctantly showed my son how to play my "fairly complex" computer hockey software, the student quickly became the tutor. While I futilely forced sports logic on the game, Zach easily adapted to the software's idiosyncrasies. "Here, Dad," he said just a little impatiently. "Let me show you how to score a goal." I try not to take the losing too hard (I take these opportunities to teach him how to be a gracious winner). Remember, kids cut their teeth on this stuff. They should be better. Plus, kids talk, picking up tips from friends (beware the teen babysitter).  The important thing to remember is that there's no substitute for parental involvement, even in electronic games. So after your little gamer thrashes you in "Backyard Football," take him out in the front yard and teach him Kick the Can. You rule. 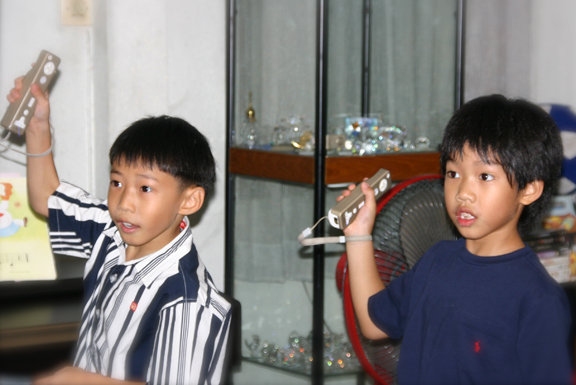