When Should Babies Start on Solids?
Baby with apple
Sneakys baby and child nutrition
Food suggestions for bubs starting out
Given the amount that is likely to go in and stay in, baby’s first foods will not provide significant nutrients. The point of introducing solids around this time is to prepare baby for new tastes, textures and modes of feeding.

* Start with an iron-enriched infant cereal. While many of these are high glycaemic foods, infants who are just starting out find them easy to digest and swallow. Use breast milk or formula to mix into a smooth paste.
* Cooked and pureed vegetables such as sweet potato, pumpkin, carrot, choko, parsnip, broccoli, peas, potato, zucchini, cauliflower.
* Once you have introduced a few vegetables you can start to mix them and create interesting combinations.
* Mashed/cooked/pureed fruits such as avocado, apple, banana, pear, choko, strawberry etc. can also be introduced, although fruit is often best left till after a wide array of vegetables have been introduced to avoid an over fondness for sweet tastes.
* If a fruit or vegetable is too runny, use baby’s rice cereal as a thickener.
* By six months, baby should be consuming iron-fortified baby foods such as rice cereal (as per dietary guidelines for children).

The timing of food groups differs from one culture to the next and as yet there are no hard-and-fast rules. The following is a guide only.

What foods at what age?

According to the literature, there are no firm rules for introducing foods. The best we can do is be guided by our baby, and our knowledge of their physical development and digestive system.

* We know that babies can digest some sugars but find starches more challenging until around 9–10 months.
* Fat can also be difficult as their livers are still developing.
* Protein in most cases is fine, although in some it can cause certain allergies, for example cow’s milk protein allergy.
* Some babies may find foods rich in protein (such as meat) a little difficult to digest until 8-9 months.

1. Stage one is getting baby used to eating from a spoon, using pureed foods, once or twice a day.
2. Stage two is becoming accustomed to texture because of improved motor skills.
3. Stage three is the introduction of lumpy texture and thick consistencies, and again improved motor skills by allowing finger foods.
4. Stage four is self-feeding and nearing family meals. 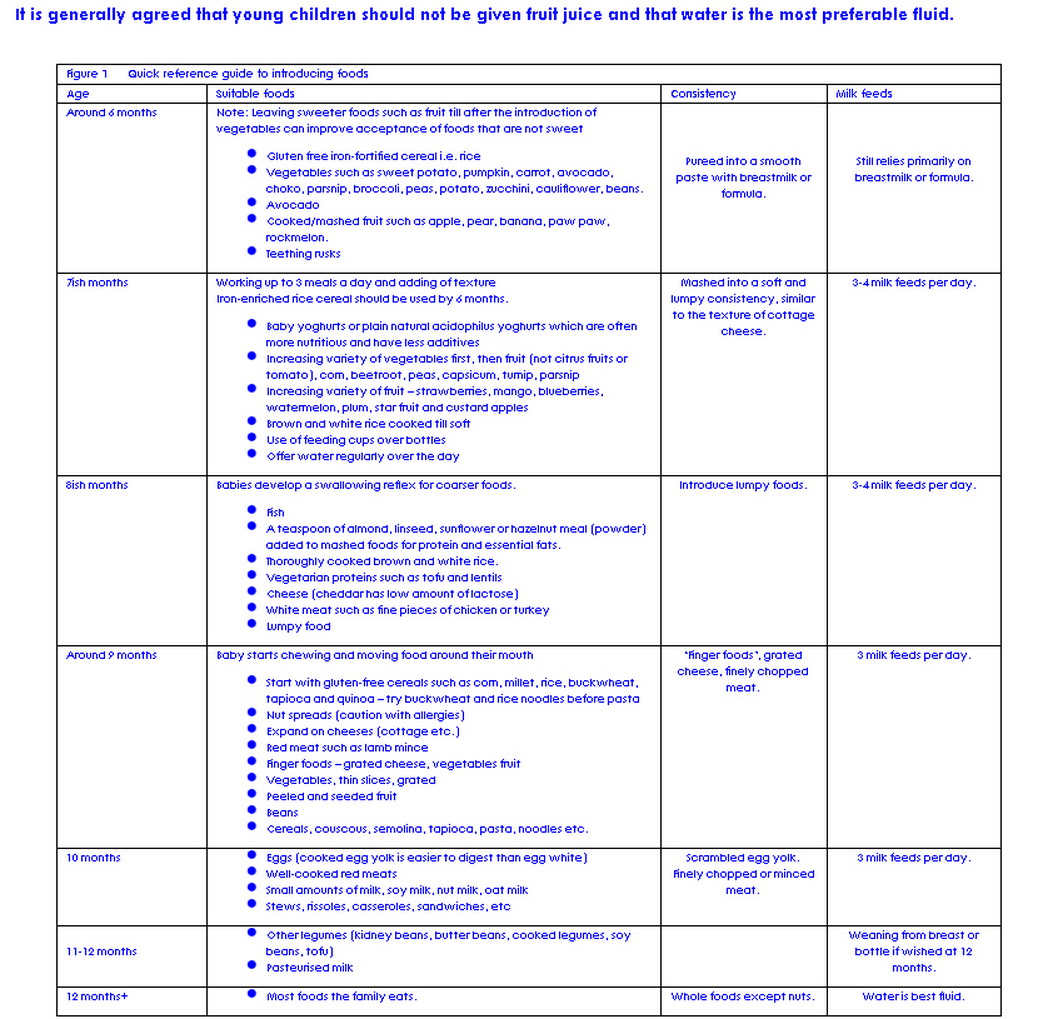